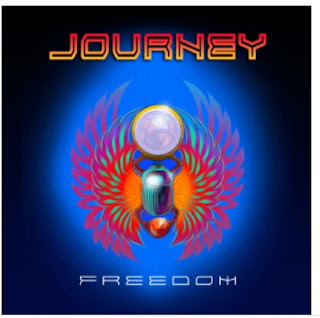 The long-awaited Journey album, "Freedom" was released today after over a decade since their last

album was released. It was well worth the wait. This is a solid rock album. There are a total of 15

songs on Freedom. These are brand new songs and each have a message with something to say and

a special way to say it. Unique melodies fill this album up, although it seems there are bits and pieces of

previousJourney songs and albums contained in them all. That's ok. It's all good. No problem with

stealing from yourselves. I can't rank this album along with past albums because there are different

singers and it would be too hard to mix them all in. Although, I will say that this album is up there

with Revelation. There is like 70 minutes of Jouurney magic that will leave you with a smile.

UPDATE: As I am writing this....FREEDOM is #1 on the top 100 downloads on iTunes. Congrats

I decided to review the album and give you my reaction to each song. So here we go.

TOGETHER WE RUN- This is a great way to start off an album.  One of my favorite songs on

Freedom. It's a straight-forward rock song that sounds like it should be included on a movie soundtrack.

The background vocals are amazing and really stand out. Everything about this song is great. It sounds

like a classic Journey song from the 80s but with a more modern sound I'd say.

DON'T GIVE UP ON US- A single released last month, it sounds a lot like Separate Ways but

it is really good in it's own way. This is a cross between the Frontiers and Revelation albums' sound. This

is one of the top songs on the album.

STILL BELIEVE IN LOVE- Nice guitar to start the song. It's a beautiful balad with an R&B sound.

A love song like this is what makes Journey so great. Arnel has smooth vocals on this. The keyboards

are really strong and add a lot of flavor. The background vocals are so fitting and mix well with the music.

This song could have fit very easily on Raised on Radio. It's such a good song. Instant classic.

YOU GOT THE BEST OF ME- This is a power punched song. It was a single a while back. It has

a very classic sound and honestly it sounds close to Any Way You Want It. Neal Schon even said it does...

but that is a good thing. The song rocks. The cool synth intro adds to the excitement. Neal is jamming hard

on this one. Great song.

LIVE TO LOVE AGAIN- Another ballad. It could have been on the Revelation album. It's just

the keyboards for a while. Then Neal plays a sweet solo. The lyrics are very touching and relatable.

This is what it is all about. A true Journey power ballad. This could have been a Steve Augeri song

on Arrival, It has that feel to it. Great vocals by Arnel.

THE WAY WE USED TO BE- This was the first single from Freedom last year. It really stands

on it's own. The main reason is because it sounds like no other Journey song on the album, Arnel's

voice sounds different too. A bit deeper. This mid-tempo song has a great beat and is very bluesy.

Neal delivers his signature licks and solo with fire. There was a video with this one....a cartoon. Very nice.

We are closer to the way we used to be in more ways than one.

COME AWAY WITH ME- Heavy, smoking guitar at the beginning. This reminds me of older Journey.

Maybe like infinity or Evolution.  I love the stops and starts and the way the drums and guitar play

off of each other. This is a great jam song. The fans will definitely love this one. I would love to

hear this one live.

AFTERGLOW- According to Neal, this was the last song recorded for the album. Maybe they saved

the best for last. Deen Castronovo, the drummer sings this one....and nails it. I love Deeno, man! It

is a mid-tempo ballad with wonderful lyrics and smooth harmonies. Neal's guitar really wails on this.

You know, if Steve Perry was still with the band....it would sound a lot like this, right? Love it!

LET IT RAIN- This is a fun jam song. Arnel really finds his own voice on this...sounding almost

like Aerosmith. The more I listen to it, it takes me back to the first Journey album....or maybe

a touch of Hardline. The song kind of flows like a rap song. The guitar is very spacey. All in all, this

is a fun song for sure and another one I'd love to hear live. They would all be smiling as they play, I

HOLDIN' ON- A retro-sounding song that reminds me of Evolution or maybe Escape....one

of the heavier songs. Lots of guitar on this and jazzy drums. The background vocals and keyboards

add a special touch. They are all smoking and jamming hard on this. Crank this one up loud.

ALL DAY AND ALL NIGHT- The bass kicks the song off. The bassist...?  The one and only

Randy Jackson is tearing it up! A great beat. It reminds me of Def Leppard and a hint of Bad English.

Could you imagine jamming with the DAWG. This captures what it is like to be in Journey and to

DON'T GO- This song is Raised on Radio-esque......definitely. There are a lot of chunky guitars

and fills running through it. The keyboards and backing vocals are solid.  Imagine if "Be Good

To Yourself" and Never Walk Away" had a baby. It's that good! This is one of my faves for sure.

UNITED WE STAND- A new anthem for Journey. It was released on July 4th...so that was perfect timing.

It reminds you of Frontiers. This also reminds you to hold on to hope and be strong in your relationships

with your lovers....brothers...and fellow countrymen and women. We definitely need to take this advice.

Great song. Amazing vocals by Arnel. This would have fit on Revelation.

LIFE ROLLS ON- Instantly this song took me to Departure. It sounds like Precious Time to me. Great

guitar work on this. Arnel really shines on this song.Great vocals. I love the organ.

BEAUTIFUL AS YOU ARE- An acoustic guitar intro by Neal. Soft Keyboards. Arnel sounds great

on this ballad. Suddenly the song transitions into a Don't Stop Believin' style groove. This song makes

me smile because it has all of the ingredients to a true Journey sound that everybody loves. It started on

a high note and ended on one too! Probably tied for one of the best songs on the album.

This album will make Journey fans smile. Everybody will be jamming on Freedom for a long time. I just

hope we don't have to wait another decade for another album!

Looking forward to seeing Journey in the future...and there's that 50th Anniversary coming up....

and Neal is talking to Steve Perry again....