Journey Release New Single "You Got The Best Of .Me" 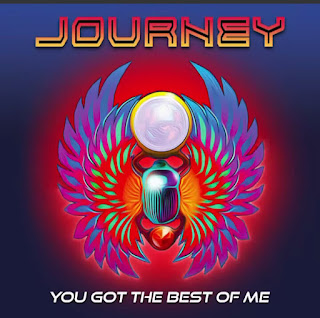 By Gary Stuckey
It's been almost a year since we've heard a new
single from the band Journey. Last summer we
enjoyed the fresh single " The Way We Used To
Be. It was a different style, different sound for
the band, but the song was very catchy and
conveyed the need to return to the way it was
before the pandemic. Maybe we aren't there yet
but with an amazing band releasing
new music, it sure helps us take our minds off
of our troubles.
Just last night,  or early this morning, we
we were gifted with a brand new song from the
Journey boys. The song, "You Got The Best Of Me
" is a rocker, reminiscent of the Escape days,
maybe with a little Raised on Radio thrown in
there. A retro synthesizer blares along with
guitarist Neal Schon's crunchy guitars.  You
immediately realize the classic sound is there.
Also, you notice that lead singer Arnel Pineda
is fitting more comfortably in his role and
not trying as much these days to sound like
former lead singer Steve Perry. He sounds
natural and maybe has a hint of Bon Jovi in
there.
All of the instruments flow well. The truth
is, we don't know who is all playing on this song
as of yet. Randy Jackson and Narada started the
album, but we know that Deen Castronovo is
back ....so we may have to look at the album
notes to give credit where credit is due.
The song is sure to be a hit. It is very upbeat
and super fun. Also, since the show Stranger
Things has gotten the song Separate Ways back
on the charts, a new generation of fans will
be eager to  check out new music from these
guys. Throw in the fact that Don't Stop Believin
is everywhere and Journey keeps getting
recognized by the likes of well-known entities
like the Library Of Congress,  which recently
inducted Don't Stop Believin into it's registry.
The band will finish up their first leg of the
tour at the end of May and will release their
album Freedom on July the 8th.