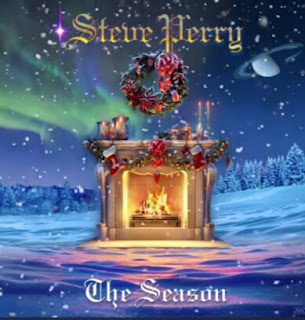 Steve Perry is giving us a special gift in

time for the holidays. The former Journey

album, "The Season" on November 5th.

Perry announced the news on social

Along with the announcement, he released a

single , "I'll Be Home For Christmas" which

Here is a summary according to his official

Co-produced by Perry and engineer Thom Flowers, The Season embodies an immaculately arranged and richly nuanced sound inspired by such time-honored holiday albums as Nat King Cole’s The Magic of Christmas. “All the songs on this record were my favorites growing up,” says Perry, who hails from Central California. “I used to hear them on the Philco radio that my grandmother always had on in the kitchen when she was cooking the most amazing holiday food, and because of that they hold a very emotional place in my heart. I wanted to make sure to record them all in a simple way that honors how I first heard and fell in love with them as a child.”

Mainly recorded at Perry’s home studio, The Season came to life in collaboration with drummer Vinnie Colaiuta (Sting, Joni Mitchell, Frank Zappa) and Dallas Kruse (a multi-instrumentalist who also worked with Perry on his acclaimed 2018 album Traces). While most of the album encompasses an understated sonic palette—piano, strings, upright bass—each track leaves an indelible impact thanks to the soulful sincerity of Perry’s vocal work. “One of the things I love most about those traditional recordings is they’re not coming at you like a rock song—they’re just sitting there quietly and inviting you in,” says Perry. “I’d never sung with that much simplicity before, and it was incredibly thrilling to bring that kind of expression to these songs.”

Despite its heartfelt fidelity to the original material—a quality especially striking on the album’s beautifully tender bookends of “The Christmas Song” and “Have Yourself a Merry Little Christmas”—The Season unfolds with plenty of surprising details that breathe new life into every song. To that end, “Winter Wonderland” merges its lush string arrangements with a Motown-inspired groove, while “Auld Lang Syne” arrives as a bittersweet piano ballad graced with choir-like harmonies. On “What Are You Doing New Year’s Eve,” The Season shifts into a jazzy reverie that lovingly nods to Ella Fitzgerald’s version from 1960. And in a particularly poignant moment, “I’ll Be Home for Christmas” opens on a cascade of layered vocals that perfectly capture its mood of melancholy longing. “As I was singing that song, I closed my eyes and all of a sudden found myself standing in the doorway that looked onto the living room of my grandmother’s house,” Perry recalls. “Her Christmas tree was always loaded with presents underneath, and covered with the tinsel that my mother and I put on to make the tree shimmer. I could see that tree so clearly in my mind, and then I opened my eyes and thought, ‘Whoa—where did I just go?’ Now everybody has passed of course, but for just that moment I was home for Christmas.”

For both artist and audience alike, The Season ultimately serves as a form of emotional time travel, a direct conduit for the kind of memories that sustain the spirit and restore a sense of joyous serenity. “Music has always been something that rescues me in difficult times,” says Perry. “I hope when people hear this record, they’re teleported in the same way I was when I recorded all these songs—I hope it brings them back to those golden moments with their loved ones, and gives them that feeling of joy and connection and comfort that we all need so much.”

The album will feature artwork once again

from artist Jeff Wack, who designed the

cover for Traces and Traces: Alternate

Speaking of the cover, notice the Northern

Lights and Saturn on the cover. I wonder

what that is all about. Maybe we will learn

more as time goes by.

I know it is not new original music, but I

will sure take it. If you're like me, you've

been waiting for him to release a whole

Christmas album. Who knows...there may

be more surprises from the Voice himself on

the way. We'll just have to wait and see. Until