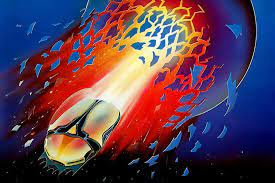 Today marks the 40th Anniversary of Journey's Escape album, released on July 17, 1981. The album contains many hits, including the well known anthem and most downloaded song of the 20th century, "Don't Stop Believin. That song has been used everywhere from sports arenas, movies,tv shows and recently to celebrate Covid patients' release from hospitals. The song was inducted recently into the Grammy Hall of Fame. Earlier this year, it passed a billion streams on Spotify. Amazing! Just this past week, it was certified Diamond by the RIAA (Recording Industry Association of America) for selling over 10 million copies of the album.
Escape set a differet tone and new sound whenever Jonathan Cain came aboard, replacing founding member Gregg Rolie. His songwriting skills and flowing piano fit so well with vocalist Steve Perry and guitarist Neal Schon. The sound was rounded off by the smooth bass lines of Ross Valory and smoking drums of Steve Smith.
"We had taken that sound as far as we could...." said Steve Perry in a 1981 interview. "We had to make a sound change. Otherwise we'd just dry up and blow away!"
"What I changed about Journey is I started writing about the people that cared for the band." said Jonathan Cain, refering to the city boy and small town girl....the street light people.... Jonathan got the idea for the song from a phrase his father had told him." Don't Stop Believin'."
Cain, along with Perry and Schon wrote that hit that made it all the way to #9 on the charts. He described it in an interview from the Tenessean.
"Now we're in the movie, and the movie goes on and on and on. I said, "I'll tell you where the location is. This sounds like Sunset Boulevard in the '70s, where I lived, and it sounds like Friday night." I was explaining to them how everybody would cruise up and down the boulevard. I mean, the hustlers, the dreamers, the producers, the actors, the actresses, the wannabe starlets, the wannabe anybodies were all on Sunset, cruising, driving, looking for their hookup, their something."
"When I first heard it, it’s a great tune, but I felt like there was a lot of great songs on that [Escape] record." said Steve Smith.
The album really took off when it was released. The band was selling out stadiums and Escape went all the way to #1. It would be their only #1 album. They have never had a #1 song..."Open Arms was the closest to it at #2.
That song almost didn't even make it on the album.
"That song almost got dropped because it had so much up-and-down-ness......Everybody was going back and forth." said Steve Perry in an interview.
"It's a beautiful song." said Ross Valory. "....It should go at the end of the second side. When the people are listening to it at night, that's how the whole thing ends...all the feathers are settling from Dead or Alive...."
Here is the track listing for Escape:
Side one 1. "Don't Stop Believin' 2. "Stone in Love" 3. "Who's Crying Now" 4. "Keep On Runnin'" 5. "Still They Ride" Side two 6. "Escape" 7. "Lay It Down" 8. "Dead or Alive" 9. "Mother, Father" 10" "Open Arms"
"I like all the songs....my favorite song (from Escape) if I had to pick one, it would be 'Mother Father." said Neal Schon in 1981. Schon's father wrote the first interlude to that song and it was later completed by Perry and Cain.
"The chemistry of the band between Steve, Jonathan and myself and the rest of the guys right now
feels really fresh."
Schon's soaring guitar really shines on this album. The songs really compliment the guitar and the vocals on Escape, in my opinion, more-so  than any other album. Perry's vocals reach a high-point
that Schon guides with each note that he plays.
"
The first single from Escape, "Who's Cryin' Now?" was written by Cain and Perry at Cain's house. Perry drove over, having written the chorus driving from Bakersfield to San Francisco, singing into a cassette recorder. (Remember those?)  They finished the song that afternoon.
What about that beautiful cover artwork by Stanley Mouse? So awesome.
What about the video game? I still have mine! The Atari still works!
What more can I say about this album. There are 10 amazing songs. The critics weren't enthused, but who listens to critcs anyway? Critics like Deborah Frost of Rolling Stone. Geeee. Do you remember that awful 2 star review? I wonder if she ever retracted those comments.
This album is the greatest of all time. Grab the album....turn it up to 10....and Don't Stop Believin.!