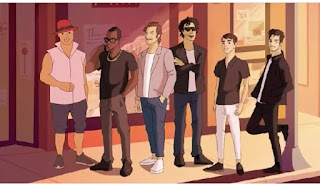 The band Journey has a new single and video out called "The Way We Used To Be" and it's very catchy. This is their first new music since Eclipse, released in 2011.

The song has darker overtones, which is not the norm for this band. Schon has more blues riffs than he's had in a long time. Yet, it still has a Journey vibe with a feel-good message.

The video is a cartoon that shows two

It has been a while, but those days are approaching as the band prepares for Lollapalooza, and other dates that are now showing up.

The new album will likely be released as the band starts performing. The song has a Journey-esque sound but with a modern feel. Lead singer Pineda is singing in a lower register. Randy Jackson is back and with the added drums of Narada Michael Walden .This rhythm section sounds punchier with a more straight-forward rock sound, Long-time keyboardist Jonathon Cain plays keyboards with more of a symphonic sound, with Jason Derlatka adding keyboards of his own and backing vocals. 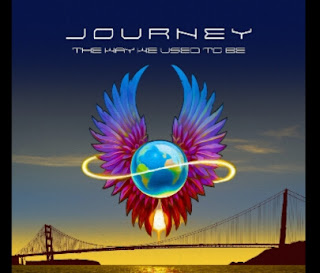 The sound, as stated earlier, is a variant from the normal Journey sound. It starts off with Pineda in his "Perry " notes, but that is where it ends. His voice sounds deeper and has more of a modern rocktone to it. Pineda is known for being able to imitate other singers, and maybe this is where he is singingin more of his true voice. The harmonies are lower than normal also which makes it different.

"The Way It Used To Be" sounds like it has a number of possible meanings. Is it a return to life the way it was before the pandemic? Is it a nod to the return of Randy Jackson and more of an earlier form of the band? Or maybe, this is a plea to the former singer, asking him if he would like to return to the band? It very well could be all three!

Before playing Lollapalooza, Journey will play at the Aragon Ballroom on July 27th. The band is no stranger to that hall, having played with Perry for the first time there in March of 1978 and several other times. If the song is an

invitation to Perry, the Aragon with it's intimate setting would be the perfect spot for a reunion.

Pineda has suggested that very thing and is even willing to step aside or sing with Perry.

More dates are sure to be added soon, the latest addition being in Las Vegas for the Iheart Music Festival in September.

Journey has still got it. Arnel is doing a great job and fans are excited about it for sure. Thenew album should be a great one.

As for Steve Perry, he said recently that he has new music and is starting a new phase. I guess wewill all stay tuned to see what that is all about.