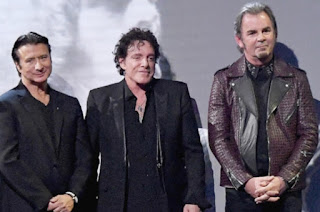 by Gary Stuckey
The song Don't Stop Believin is on a roll in recent days. The Journey anthem was voted to be inducted this year into the Grammy Hall of Fame. Tonight, Journey guitarist and founder Neal Schon celebrated another milestone.  The song has now surpassed one billion streams on Spotify according to his recent tweet.
"The writing team that propelled Don't Stop Believin past one billion streams on Spotify." He tweeted with pride, and he tagged his cowriters, Jonathan Cain and Steve Perry and posted a classic pic of the trio.
Coincidentally (or not) Schon and Cain celebrate birthdays this week.  Cain's birthday is tomorrow (February 26) and Schon's is the following day on the 27th. This is a great way to celebrate their birthdays in my opinion.
Missing from the party is Steve Perry, former singer of the band, who has been absent from the group since 1998. Perry has reportedly not been on speaking terms with his writing partners in years, though there was a brief reunion during 2017's RRHOF induction.
If it were up to Journey's current lead singer, Arnel Pineda, Perry would be back in the band.
(I) will sing w/ all my heart #TheirLegacy for as long as i can..
but im really wishing that #TheVoice himself will someday reconsider singing w/ his band again & complete the circle once & for all." Pineda tweeted this week.
Pineda has repeatedly brought up that idea over the past few months. Many fans all over the world, I'm  sure,have thought about what a reunion with Perry would be like. It has been a discussion with fans for years.  Many believe he has moved on and will never return, while others, like myself will never "stop believin'.
Schon, who has repeatedly reached out online with invitations for coffee with Perry and offers to join the band onstage, has seemingly given up hope. 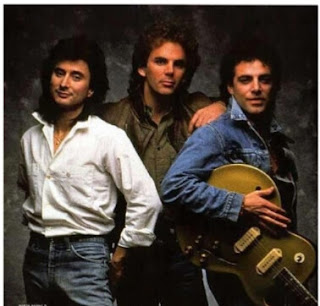 "It's not gonna happen,bro. You're it" he replied to Pineda in his tweet.
Or perhaps it is just a way to tone down the pressure. I think it is in his heart that a coffee chat would really be a step in the right direction and at least they could be friends.
We shall see what the future holds. Journey is about to release a new single and a new album. I am truly excited. Meanwhile,  Perry is working on new music. I have hope...I believe anything is possible . Never say never.
....and Don't Stop Believin!