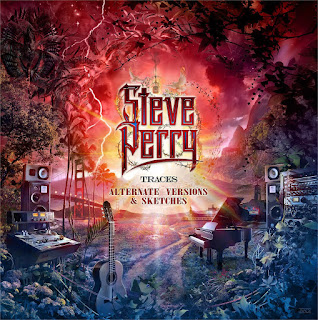 "It's eight songs from the Traces record done acoustically and I'm really proud of it." Steve told

Rolling Stone in a recent interview. In the past two weeks, two songs from the album have been released...new stripped down versions of Most Of All ( with a radio edited single and video released)

and No Erasin. Perry has posted on social media various times, promoting the new album and new

merchandise on his website. It is expected for him to release another song on Friday, a week before

the release. On the cover of the album are an acoustic guitar and grand piano,

which may or may not have any significance, only time will tell. There is also recording equipment

shown , and what seems to be a shiny pearl in the background, going along with the mystery of the

objects from the Traces album.

The day of the release may be on purpose. It was the day that Perry's mother passed away 35 years

ago. She had previously let Steve know by speaking only the word "Journey" that she wanted him to

go back to the band after a hiatus. He kept his promise and returned, recorded Raised on Radio, and

then a tour followed. The reunion didn't last long as Perry would leave the band in 1987 after saying

that he was "toast." He would return to the band in 1996 for Trial By Fire only to leave again after

"I had a dream that Mom had a gift shop and that she was so happy and doing fine and looking amazing," he said in an online Q&A. "She had been sick for so long that this was what I needed to know even if it was a dream. I later went to Jon Cain's and told him I wanted to write a song about this experience and started singing a melody and we finished it together. The song is very special to me because it's about Mom and all that she gave me to survive and when I miss her, all I have to know is... She's right here... When I think of her."

Perry was very close to his mother, Mary, who had given him a golden eighth note for his

12th birthday, which he still wears for good luck. In memory of her, he has stated in

the liner notes of his past albums that the

"promise continues" and one wonders, despite many who have "stopped believing", if

there may be a Journey reunion in the future.

Another promise he made was to his girlfriend, Kellie Nash, shortly before her death

in 2012. He promised her that he would not go back into isolation.

He has kept that promise. Yes, the promise continues.