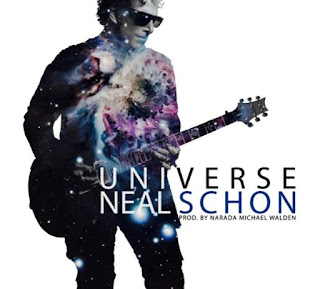 by Gary Stuckey
Neal Schon has talked about his long awaited solo album Universe for a while now. Things happen however, and sometimes projects get pushed back. And of course, this is the ultimate year for pushbacks.

Now the wait is ever. Schon announced on twitter yesterday that the album will be released in early December. (Steve Perry releases new remix album on Dec 4th. Coincidence?)

"There are some interesting covers on here" Schon tweeted. "...as well as originals written and
produced by Narada Michael Walden." Schon mentioned that there will be covers of songs by
Jimi Hendix, Prince, John McLaughlin, Stevie Wonder, the Beatles and Journey.
Journey of course is his band that he has been a part of for almost 50 years. (Wow. Really?)
And they will be releasing a new album early next year and hopefully going on tour after the
pandemic goes away, which will be a blessing. Fans will definitely be excited to see Journey live
afte the cancellation of their tour this past year.
Schon is really excited too and he shared his comments with fans on social media.
"We do 'Be Happy' by John Mclaughlin." he said. Mclaughlin led the jazz fussion, progressive
rock band Mahavishnu Orchestra back in the early seventies. Schon is a huge fan of his of course
and have similar playing styles and musical interests. Narada Michael Walden, new drummer for
Journey, who also worked with Schon on his new album, was also part of Mahavishnu Orcehestra. 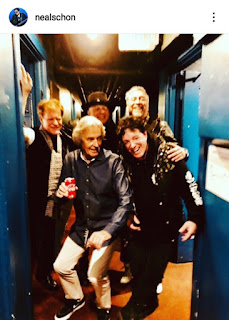 Another  awesome guitarist covered on this album is the late Jimi Hendrix, a long time favorite
of Schon's and he has played many tributes to the legend over the years. On a recent post on Instagram,
Schon had a very awesome clip of himself playing to the crowd, with a huge  ghost-like face
of Hendrix in the sky, surrounded by a mist. It was done in honor of Hendrix' birthday.
"Jimi was a huge influence on my playing." Schon said in a 2012 interview. "There's no denying
that. I think everybody would have to admit that, and if they didn't, they would be lying."
A Prince cover will be included on the album. Prince actually contacted Jonathan Cain of Journey,
whenever he recorded the song Purple Rain. He felt that it sounded really similar to the Journey song Faithfully, written by Cain. "Prince felt, I guess, it was obvious enough that he worried we were
going to sue him." Schon said in a Billboard  interview. "I think he called our office asking about it
and we all talked about it and everybody said 'Nah, it's the highest form of flattery. Let it go."
The album Universe will be Schon's 10th solo album. His latest solo album was 2015's Vortex.
"There's some very healing music for this Christmas." he said in yesterday's tweet.  And everybody knows we sure need it. Thank you Neal!!!
Labels: Neal Schon Universe Journey Jimi Hendrix