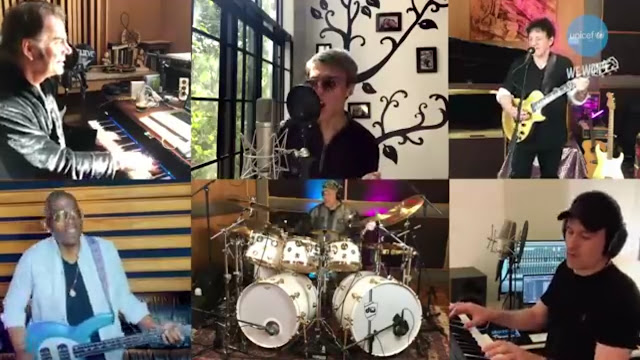 Fans have been excited about the new Journey line-up since their appearance on MSNB recently.
After performing Don't Stop Believin' on a special program called We Won't Stop to raise money
for UNICEF, the band made an official announcement via Neal Schon on Twitter. The breaking news was that there were new members, American Idol star and former bassist for Journey, Randy Jackson, Grammy award winner, drummer, Narada Michael Walden, and on keyboards, backing up Jonathan Cain,Jason Derlatka .

There was also a recent announcement by the band that their 2020 tour with the Pretenders
had been cancelled because of the pandemic, with the hopes of touring again in 2021. Guitarist Neal Schon has kept
fans believin' and mentioned on Facebook that new music and a world tour would be coming
after things return to normal.

Schon has mentioned new music has been coming since last year. He also has a solo
album that is yet to be released called UNIVERSE, which has been put on hold for the
last couple of years. Also an autobiography has been slated to be released but has also
been delayed, probably because of the continual drama and changes within the band. Long-time
members,bassist RossValory and drummer Steve Smith were fired in March after an
alleged attempt to take over the band. There have been lawsuits filed by both the band and
Valory in a counter-suit, and court proceedings are scheduled for sometime in June.

There have also been documents involving Steve Perry and former manager Herbie Herbert, who
own a share of Nightmare productions with Schon and Jonathan Cain.

Journey fans everywhere have spoken up in the excitement of the new members and also
the hopes that everything could be worked out in court, Many fans, including myself
have never stopped believing that somehow Steve Perry will work with the band again.

No official news about any reunion, but exciting news is here. Of course we have been told
that new Journey music is on the way, and Neal Schon and new drummer Narada Michael Walden
were seen on Instagram jamming to new music, Schon said recently on Twitter that new Journey music will be soon. "Hopefully beginning of July" he told a fan.

Longtime hardcore Journey fans have been waiting for new music from the band since their
2011 release Eclipse. That album debuted at #13 on the Billboard 200 charts, but did not
sell as well as the first album with singer Arnel Pineda. They released Revelation in 2008.


With the addition of Randy Jackson, fans are hoping for more of a retro sound, comparable
to Raised On Radio, which Jackson played on in 1986. Also expected is the R&B drumming
style of Narada to compliment the sound.

Fans also wonder if this line-up will influence the return of Steve Perry, if not for a reunion,
maybe just a few songs. You know me, I will never stop believin'.
How about you?

Looking forward to new music from Journey very soon and possibly a month away....