Is Steve Perry's Song 'No Erasin' About Journey? 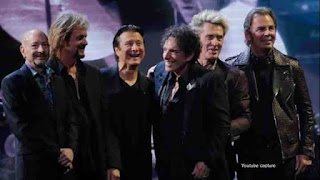 It was early morning, one year ago, in New York at Q104.3. Radio personality Jim Kerr was interviewing the Voice himself, Steve Perry on his return to music, and discussing his new album Traces.

Jim Kerr... such a great interviewer, with his booming DJ voice, full of energy...and overflowing with great questions...he really tried to pull things out of Steve. Jim has obviously studied Steve's life and has put things together in his mind. The two men worked their way to the subject of "No Erasin', the first single from the new album. Jim, like most talented interviewers, knew the answers already...or at least had a hunch. He worked his magic and got some good responses and information from the ex-Journey singer, that many may have overlooked.

"There was a popular song about that subject (re-connection) by the Classics Four way back called "Traces" ...and that had to do with...you know, there are things from the past that you are never going to be able to get out of your head ...ever ever ever...."

"I love spooky...that was a great song!".. Steve says, trying to change the subject it seemed..

And Jim continued, "...but it seems that that song more than about the backseat was about re-connection.."

" It is about re-connection... to something in your heart that you may have turned away from or didn't know was there. Now it's time to reconnect with something that is not going away, because you know.. wherever you go... you go on vacation today... you go to an island, enjoy yourself, but guess what...wherever you go there you are ...and there "it"is too ...it's just always with you..these memories.."

Steve seemed to be recalling memories and remained really focused on the question. His metaphors to life experiences were obvious..maybe to only those who have paid attention to intricate details, and he explained it the way his heart led him. The "island" he spoke of was his isolation from the band and from music all together...and not unlike the island of Hawaii, where Steve frequently likes to vacation to get away from it all. Not coincidentally, he was in Hawaii when he injured his hip, which
ultimately led to the break-up...or at least his departure from the band.

Jim was ready...He set Steve up, because he knew where this was going. The "reunion" song "No Erasin" and the Rock and Roll Hall of Fame induction are reflections of one another. Obviously
Journey is part of the "traces" that Steve wants the world to see through releasing the album....along with his other memories, like his beloved late girlfriend, Dr.Kelly Nash.

"Since you had been away for so long...was there ever any hesitancy on your part about attending the Rock and Roll Hall of Fame induction ceremony?... Or were you enthusiastic immediately at the prospect of being there... to be so honored?"

Resurrected feelings...not unlike a Phoenix. The beautiful bird that would rise from the ashes... A bird that was represented so eloquently on the cover of the single 'When You Love A Woman' ..Journey's
first single from their reunion album "Trial by Fire" in 1996.  The artwork featured the fabulous bird, in the shape of a woman, rising from the ashes of a volcano. Fast forward to the present day, and Steve Perry's latest single "Sun-Shines Gray" features a volcano for the video cover. The artwork on Traces reveals hidden meanings, which feature clues about Journey members. When you are "tried by fire" the ashes remain....but the symbolic form of the phoenix rising from what is left....and a "rebirth"begins. This happened with Steve not once....but three times. He would recover from grief....with the loss of his band-mate in "the Alien Project"...and join Journey...He lost his mother and left the group in 1987...only to rise and rejoin the band in 1996. After leaving the group and rediscovering himself once more, the loss of his beloved Kellie inspired him, and according to his promise, he once again' rose from the ashes. He is working on his solo material...but it seems that it
will ultimately lead to a reunion with the band that he can't "Escape" from...A band that hasn't gone away... And with these resurrections, there were three solo albums....and with the first two, a Journey album followed 2 years later....so should we expect a new Journey album in 2020?

Well..let's dig deeper into this discussion....So Steve, upon answering, pieced the two narratives together...the two reunions...one imaginary..in a song...and one that was reality in 2017 with Journey's induction into the RRHOF. His heart was exposed, whether intentionally or not and Jim had successfully pulled hidden feelings and non-denying truth from it's inconspicuous crevices. This truth, so swiftly exposed in fact, slipped right by many non-suspecting fans and reunion naysayers that have long given up on any such idea.

There's the new single "Sun Shines Gray," which may be a description of  how volcanic ash looks from anyone trying to see the sun nearby an eruption. This only follows the pattern of the revelation of clues....No Erasin' of course.....and also "We're Still Here," Steve's third single from Traces that seems to describe he and his band-mates. Speaking of that awesome induction into the RRHOF, there was a speech given by Journey guitarist Neal Schon...and his first words were "this is so long time coming"
and of course...Steve answers back a year later on his first single in years with, "I know it's been a long time coming..." And Journey bassist says "We're Still Here" in his speech. These "clues" can't be denied. Steve mentioned his brothers....his former band-mates....nonchalantly in his music....and in the artwork for his album. Reminds us of the song "Anyway"from his FTLOSM album in 1994.He's hinting around to the future....and where his heart is. With each interview he has never ruled out a Journey reunion.....and now you know why. It's all about timing.... Don't Stop Believin' !