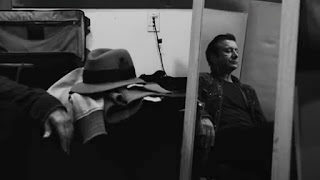 I'm sure you've heard of Steve Perry's comeback by now, unless you live in a cave somewhere. "Traces" made it's appearance back in October, and it was the 3rd official solo album for the former Journey vocalist.For the past year or so it was foretold that the album would be cathartic,  and it has lived up to it's description. The album was Steve's statement about what he's been through and a fulfilled promise that he made to his late girlfriend Kellie Nash, who died of cancer in 2012. Many of the songs on the album you could tie to Kellie. Even the two songs written before Steve ever met her, sound like they were penned for her.
Several months after it's release, you can still see Mr. Perry's enthusiasm for "Traces", whether it's at a party, an interview, or the recent grief conference in Seattle. His excitement for the album is evident, though somewhere inside, we all know that he is still dealing with the loss of his mate. Perhaps that's why he wears black all the time, but that doesn't matter. Everyone heals in their own way. Steve uses his emotions to create music. He has shared with us so many times about the making of the album, his heartaches, and how that grief shaped much of his latest recording. He sat before an audience in Seattle, Washington recently, at the Museum of Pop Culture, among a panel that discussed grief and how it relates to music. The crowd paid close attention as "The Voice" described
in great detail his emotions and the moments that lead him to record his masterpiece.

"I'm a pretty melancholy mofo-kind-of-guy. I kinda live in a melancholy state all the time. For me....I guess...is that too much sadness? I don't know..It does keep me...it keeps me centered. It keeps me in the moment. Am I a depressive guy? I don't know. I call it melancholy. I write music that I think speaks from that place. And when I had my profound loss with Kellie a few years back I agree that being pulled into the moment deeper than I had ever experienced before was a new place, you know....to where everything that mattered I thought fell off..... I'd seek professional help to try to really learn how to grieve because I didn't know how. So, the professional I was going to turned to me and he said "I think you need to cherish the grief." And I said, 'Excuse me? I'm tired of crying. I've been crying so much. It's been going on now for 3 or 4 months'...and he said, 'I know that but if you cherish the grief that you're in right now, I guarantee you that there will come a time where you won't be able to access it as deeply and as clearly and in the moment as you are now. So I think as it starts to come up and you start to get back to whatever happens once we do face the grief and cherish it, you'll be glad you did.' So, that's just been my experience. Everybody wants to pull out of it...  and me, I just want to move on....I'm so grateful that I didn't."