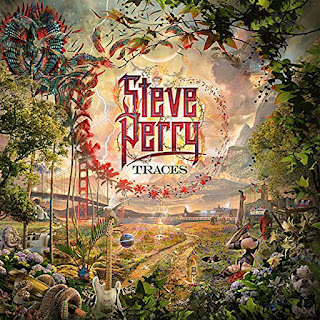 It's almost here. The release date for Steve Perry's long awaited new album, "Traces", comes out on October 5th,2018. Two singles have dropped, "No Erasin'" which was released on August 14th and "No More Cryin'" on September 5th. There were videos that were released on the same days that these singles were released. Both videos show Steve jamming with his band in a studio. Steve dances and sways as he sings with a joyous expression on his face...even trying on his "Street Talk" hat in his first video and sporting a more relaxed look in the reto bluesy "No More Cryin'" video. The songs are very enjoyable, easy to listen to and reflect Steve's passion. You can hear "traces" of Steve's vocal styles that he has used throughout his career. The song "No Erasin'" peaked at #20 on the Adult Contemporary Charts, but is already losing ground. The current status of radio today is no where near compatible to the days when we were "raised on radio" (pun intended.) Not to worry, because Steve Perry fans could care less about radio these days and will support Steve through album sales. The Album "Traces" should debut at #1...no question about it. We shall see what happens as there are only 2 more weeks to go. The wait is almost over! Also be sure to check out Steve's new single, releasing at midnight 9/20...with new video!
Here's a Track Listing of the Album* *5 more tracks on bonus cd