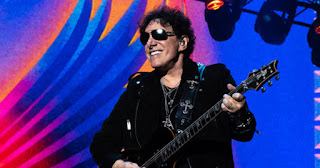 Journey guitarist Neal Schon has been busy these days. He's finishing up the last leg of Journey's tour with Def Leppard, which has been the most successful concert this year, and it wraps up on Oct 7th in Los Angeles. Schon's wife Michaele, who has graciously been taking pictures and videos of her husband and the band throughout this tour, is his biggest fan. She displays their love for one another and the joys of experiencing their "Journey" together, which you can follow over on Twitter,Facebook, and Instagram, Now you can visit Schon on his new YouTube channel, which he just started up yesterday and his new blog over on Google+. The YouTube channel features several of his guitar solos, taken from various concerts of this year's tour. There are other videos, including a clip of Schon's interview with rock singer Sammy Hagar, Over on his blog you can find several interviews, pics, and information about everything Schon, It is a pretty nice setup with all kinds of interesting things to see, just fresh of the presses so to speak. There are a few artcles mentioning Neal's hopes to work with ex- Journey bandmate  and singer Steve Perry. Perry, who has just returned on the scene after a 20+ year hiatus, will release a new solo album, TRACES on October 5th. Schon and Perry rekindled their friendship at last year's Rock and Roll Hall of Fame induction Ceremony. Since then, Schon has expressed his desire to work with Perry and have a cup of coffee together. He has also dedicated the Journey song "Lights" to Perry at each concert, the second song the duo ever wrote together,
Schon has stated that early next year he will be releasing a solo album entitled UNIVERSE , which he promises to be a "magical" experience. Also following the release of the album will be Schon's anticipated autobiography which is sure to be a best seller. And check this out, he's also releasing a line of clothing! This is Schon-sational!. It sounds like a lot of exciting things are coming up in Schon's world very soon, so hold on to your seats....and Don't Stop Believin' !