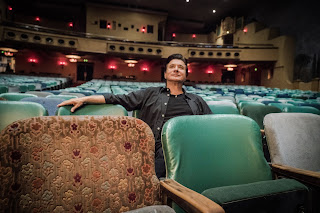 At the stroke of midnight, eastern time, there was a feeling of excitement for all Steve Perry fans across the world. Steve released his new single and video for "We're Still Here," the third single from the up-and-coming album "Traces," due to be released on October 5th.

Steve stated on his official website recently.“This is one of my most favorite songs on Traces because it speaks of the inclusiveness of us being together in the same place at the same time, and to not take lightly the fact that “we’re still here.”

Steve did an an interview with World Cafe recently, and explained how his new single came to be.
"Well, Randy Jackson (former Journey Bass player) was working on a project with a writer named Brian West and he had a writing room at the...like 10th floor of a building on Hollywood and Vine..And so we're coming up with a sketch idea, I said I'd love to work with this guy sometime, so we come up the sketch idea, me and Brian..And we took a break, went to dinner and as we're going to dinner I see all these kids, man...I mean... 15, maybe 16, 17..I had been gone for a while..I had not written music for a long time. And I realized..Gosh, You know,through these kids, we're still here doing the same thing too. Nothing changes. It's still the same. Then it kinda morphed into the idea of being on stage and singing "We're Still Here" together..And it just kinda grows and talks about both sides of that...Under neon lights we claim this town..Noone can take us down...no, not tonight..you know.. City boys and city girls running wild..It's just what we all do..It's the rights of passage..And I just thought there was just something inclusive about being a part of it all again through them."

This single really captures the true essence of Steve 's classic sound. There are "traces" of Journey all throughout the song. The vocals, flawless....the harmonies..the lyric are very deep and reflective of the past and the present, with an homage to the Journey song, "Don't Stop Believin' " which is a timeless anthem that keeps showing up everywhere, appealing to every generation. There's even an awesome guitar solo, which was missing from Perry's first two singles. Everything you loved about Steve Perry in the 80's and 90's can be found right here in this song. It is sure to be a hit on the charts, even with the wishy-washy standards of today's radio scene.

"We're Still Here" even caught the attention of Perry's former bandmate Neal Schon who recently tweeted, "Alright Steve, You sound amazing on this one" Schon agreed with a tweet about the new single.
Steve continues the excitement on Monday, September 24th at 12:00 pm pacific time, when he will have a live feed on his new Official Steve Perry Group Page on Facebook. Steve will explore the making of Traces, which is sure to be an informative and entertaining look behinfd the scenes. The feed will last for about 15 minutes and is the first one from Perry since joining social media. There will be no Q&A portion to the feed, just a video, but hopefully we will get to experience that as the new album is released.